A Day with the Myo

I’ve been playing around with the Myo armband from Thalmic Labs for some time, so I decided to use it for a day to see how it was with continued use.

After a run I took it on around 9am and started to use it for music control. The controls works very nice when just sitting at your desk, but as soon as you do stuff like cooking the controls really mess up. I went biking and it worked alright, a few times the close fist motion was registered but other than that, i had no problems.

I wore the device all day, even though I didn’t constantly use it. I wanted to see how the battery held up and how it felt on my arm over a whole day. After trying out the music app again, i decided to look at Activator to see how it would work. I found an old implementation based on PebbleActivator and updated it to work with the latest Myo SDK and fixed some bugs. I got it running on my iPhone and the gestures works, but only in the app and not on the Springboard. I’ve never worked with activator before, so I’m a bit lost on what the problem is.

Back home again I connected it to my MacBook and turned iTunes, Spotify and Global Mouse Control. I was expecting it to work in iTunes without being inside iTunes, but alas that’s not the case. If not inside iTunes/Spotify the Global Mouse Control starts when using the lock/unlock gesture. So I removed all plugins except for iTunes, but still I have to be inside the app. At least for me that kind of defeats the purpose of using the armband. If i have to be inside the app, it is quicker for me to use the keyboard than a gesture.

So far it hasn’t been a huge success. The band have been hurting to have on for so long and it leaves a huge mark on my arm. 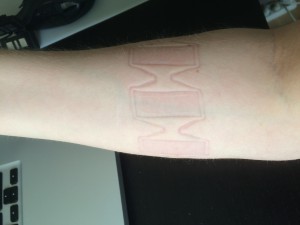 One really positive thing is that the battery life is really good. After about 10 hours of use, I’ve only used 50% of the battery.

If I get the Activator plugin to work, I’ll write some more about it. Else it will probably be forgotten for now.